A good friend and writer friend of mine, Ella Quinn, has inspired me. She faithfully posts wonderful blogs, and sometimes they are about her stories. On her blog today fellow authors are welcome to post an excerpt of witty dialogue. Well...because I'm not at work and I actually have the time, I couldn't resist. That also got me thinking...why don't I do this on my own blog?

So, without further ado, I will post an excerpt from book #3 of my sweet Regency romance series, which is what I'm currently working on and nearly finished with - "The Sweetest Love". 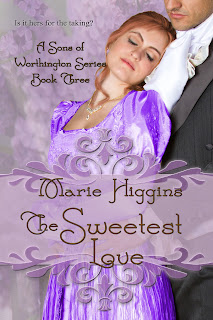 This scene is about my secondary characters - Lord Hawthorne (Dominic / Nic) who is the hero's friend, and Tabitha who is the heroine's maid. Dominic isn't used to women ignoring him and turning away his charm, but Tabitha can see right through him and doesn't like him one bit. **HINT...Nic and Tabitha are my hero and heroine in book #4 - The Sweetest Secret** Also in this scene, Nic is trying to keep Tabitha occupied while Tristan & Diana (hero & heroine in The Sweetest Love) are having a private talk. At this point in the story, Tristan and Nic think Tabitha is a killer...
Nic grumbled under his breath. Tabitha was more intelligent than he gave her credit for. But of course she was smart. Who else could have killed two lords without leaving a trace of evidence?
“Forgive me for upsetting you, my dear. I fear I’ve been doing that quite a lot lately, and it’s not my intention.”
She arched an eyebrow. “Then tell me, Lord Hawthorne, what exactly is your intention?”
“Just to get to know you better.” He set his empty glass on the table next to him.
“Why?”
“Because you intrigue me. Is that not enough reason?”
“No.” She placed her glass on the small table beside the sofa before turning to look at him again. “Lords like yourself have no business wanting to get to know women servants so personally. There is only one reason masters want to chum with us, and it’s only for seduction reasons. As I told you before, I will not allow that to happen.”
“And as I told you before,” he moved closer, sliding his arm along the back of the sofa until it touched her shoulder, “that is not my purpose. In fact, I’m getting quite annoyed that seduction is all you can think about.”
“Me?” She gasped. “I assure you, that is not what I’m thinking about.”
“Yet, every time we have talked, our conversations always end on this subject. Tell me why that is, especially if you never think about it as you proclaim.”
“Once again, my lord, you are putting words into my mouth.”
He dropped his focus to her lips and wished she would stop bringing his attention to that most tempting feature on her face. “Actually, I think you are trying to put ideas into my head, my dear.”
“I am not.”
He met her heated gaze. “No? Then why are you talking to me like this? I never once mentioned seduction, and already in our short conversation, you have brought it up a few times.”
“Lord Hawthorne, not only do I wish we could cease this most improper topic, I can assure you seduction is the last thing on my mind.”
He narrowed his gaze on her and tilted his head slightly as he studied her. “You know, Tabitha I believe you.”
Her eyes widened. “You do?”
“Indeed, I think I have been mistaken about you. Now I can clearly see that seduction is not what you want at all. It’s obvious that you are too frigid to be the kind of woman who is passionate like that.” He nodded. “Now I see why no man has claimed you for his own yet.”
She inhaled sharply and her whole body went stiff. “What?” she shrieked. “You cannot be serious.”
“Oh, I’m indeed very serious. Everything is beginning to make sense.” He gave a light laugh as he stood and walked to the liquor tray, tempted to pour himself another drink, but refrained for the moment. “You are the first woman I’ve come across who didn’t enjoy my attention. Now I know why.”
“That is not why!” She jumped to her feet and stormed toward him.
He held up his hands in surrender. “No need to get upset. It’s all right to admit that you are not interested in men.”
“For the love of—” she muttered something incoherently. “You are the most infuriating man I’ve ever met, and you are very wrong. I am indeed interested in men.”
“Actually, you’re not.” He grinned.
Tabitha stomped her foot. “I am!”
“Forgive me for not believing, but you have shown nothing of the sort, my dear.”
Her face turned so red he thought it would explode. She grumbled under her breath.
He’d give anything to know her thoughts right now. Taunting her this way was quite enjoyable, and yet…it was as if he wanted to goad her into doing something that only happened in his dreams.
Shame on him because he’d never had to sink to this level with a woman before. If teasing her and seeing the fire in her eyes wasn’t so stimulating…
“You insufferable…jackanapes! If you weren’t so thick-skulled, you’d see…” She gnashed her teeth. “Augh!”
He wanted to laugh out loud, but he worried she’d catch on to his game. “Tabitha, there is no need for name-calling. I promise I shall not speak a word to anyone about this discovery.”
Stepping closer, she clutched his shoulders. “If I didn’t hate you so much, I’d…I’d…”
“You would what, my dear?” he said almost in a whisper, hoping she’d do what he wanted her to do.
Her gaze pierced his before it wandered over his face, coming to rest on his mouth. Dryness gathered in his throat, and he didn’t dare move, especially when her angry expression slowly disappeared and was replaced with one he never imagined he would see on her.
**COMING SOON - The Sweetest Secret** - Nic & Tabitha's story... 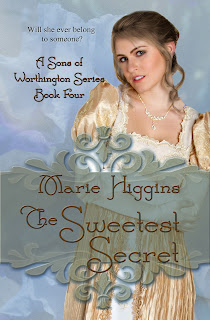 I'm excited to be part of this giveaway hop "Love in Bloom"....because you know how much I love romance. 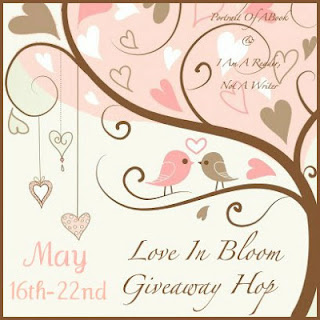 For this giveaway hop, I'll be giving away a paperback copy of my sweet Regency romance - "The Sweetest Kiss". My book just got a face lift, and I ADORE my new cover!

To enter this giveaway, all you have to do is leave a comment on this blog with your name and email, and follow my blog. 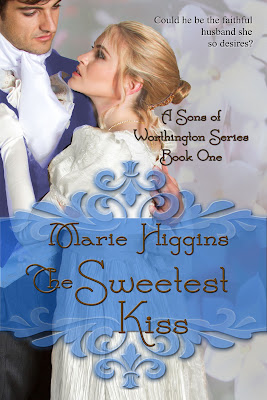 Judith Faraday is only after one thing—to marry her Naval Officer and enjoy a life full of love. She’s doubtful her dream will ever come true while living as the ward to the dowager duchess. However, the longer Judith is with the dowager’s son, Trey, an attraction blossoms. Judith now wonders if God has different plans for her life, because Trey doesn’t believe in the sanctity of marriage…the very thing Judith cannot do without.


If you'd like to find more blogs that are participating in this hop, go here -
http://www.iamareader.com/2013/04/love-in-bloom-giveaway-hop-sign-ups-may-16th-to-22nd.html

My day at the Renaissance Faire

Saturday, May 11th was a great day to attend my very first Renaissance Faire. My daughter, Chrystal, and her friend invited me, and my grandson wanted to go with us. I talked my daughter into dressing up since I thought it would be fun! But...it was HOT! Yeah, first hot day of the year. We lived for the moments we could find shade - or a breeze.

So here are some pictures for your viewing entertainment. I'm exhausted now, so I'm not going to do anything for the rest of the day and maybe tomorrow. (grins) 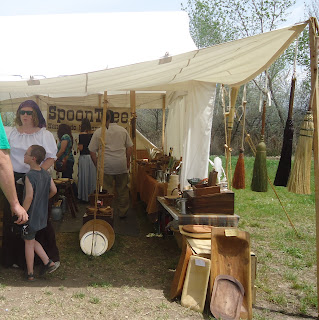 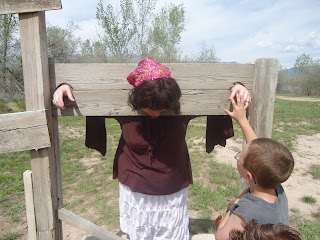 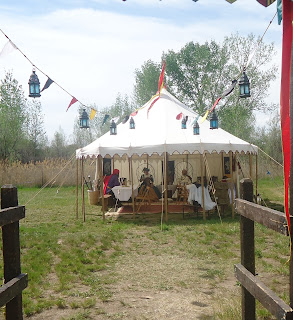 Okay, so that was my day - all 3 hours of it. I look forward to going next year! ﻿Who wants to come with me? Maybe we'll get to see the jousting tournament then since we missed it this year.
Posted by Marie Higgins at 9:40 PM 2 comments:

It's that time again!!

By now, you probably have heard me say how fun it is to get a new book covers. So...this time I won't say it.  I'll just jump up and down, squeal, and clap my hands. (can you hear me - or at least feel the ground shake?)

I don't really know when this book will be out, mainly because I'm finishing up one story, and I still have two more to finish before I even get to this one, so keep in mind, the blurb might change before this story is finished.

Worth Fighting For by Marie Higgins, a clean historical romance 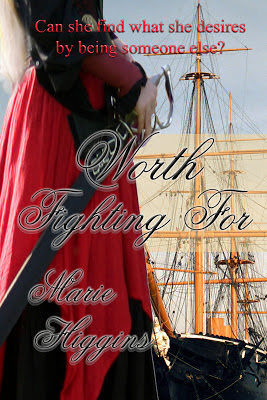 Phoebe Alphius, daughter of the governor of Turkey, was told at a tender age that she was the goddess Artemis, reincarnated. Just because she has the silver-blonde hair of the goddess, and she has the bold personality, hunts and fights better than any of her brothers, doesn’t mean she is Artemis. All of her life people have treated her differently, and she’s tired of it. She wants a normal life. She wants to find love. But just as Artemis, she’s going to die without ever knowing a man. There’s only once choice to make…she must leave Turkey and pretend she’s someone else. Now all she has to do is find a way out.


Captain Barry Winston just received word that his father is dying—which means Barry will become Duke of Lockhart. His trip to Turkey will be his last and he will give up the trading business for good. Sailing back to England, he realizes he has a stowaway. Her beauty is breathtaking, and she makes him laugh more than anyone has ever done before. Yet she is just a servant, so he cannot possibly fall in love with her and take her as his wife to become a duchess. His heart has different plans because forgetting about her would be impossible.
When her identity is revealed, will Barry be able to keep her from being taken away? Is their love worth fighting for?

Posted by Marie Higgins at 9:59 PM No comments: