I was invited to submit a story for potential movie adaptation by Wattpad Studios, and I'm one of the 10 finalists.

Over two years ago when I was going wild with writing twisted fairy-tale romances, I had my cover artist put together this cover. Unfortunately, I only had two chapters written before I was pulled to another project. But this cover is PERFECT! Thanks, Sheri McGathy! 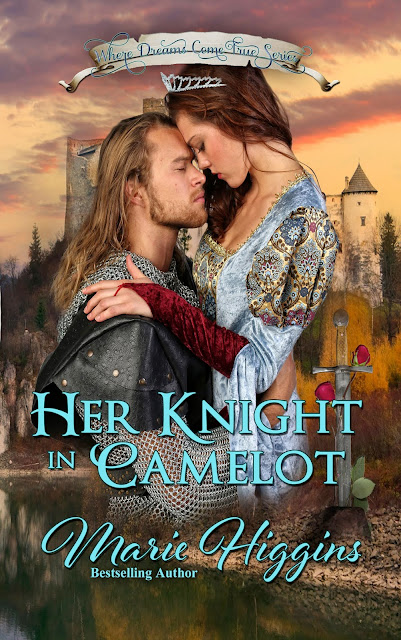 This is my submission. I hope you like it!!


A modern-day man's world is disrupted when a woman claiming to be from the medieval era travels through time to take him back to Camelot. It's too bad he doesn't believe.

Camelot is in trouble. The king is dead and the rightful heir was magically transported into the future years ago. Now, the granddaughter of the great sorcerer, Merlin, must travel forward in time to retrieve the true king. The problem... she knows very little magic and isn't prepared for the modern world. Worse, King Arthur has no idea where he came from, and she's misplaced her only means to return them to Camelot.

Shifting his position on the steed, Arthur Gavin Beaumont clamped his right hand over the steel sword hooked to his belt and leaned forward. A bead of sweat dripped from his forehead, sliding down his cheek. The medieval knight costume he wore nearly suffocated him, and once he was in full action, it would become even hotter. He waited for the signal so he could ride out in the center of the ring to battle against Lance, the Blue Knight. Gavin’s title was the Red Knight—the Lion’s Heart.
Strange that he’d assume that particular title. In his childhood, his delusional mother used to refer to him as Prince of Camelot. She would always pretend she was the queen and he was the prince. He never knew her to be serious, and yet, every game she played with him, every sport she urged him to take had something to do with the medieval era.
Chuckling, he scanned the many people who’d come to this afternoon’s event at the Medieval Restaurant. Wouldn’t his mother be proud of him now? He loved his job, and his skill exceeded the requirements for the games performed at the restaurant. The crowd was privileged to see their favorite knights battle against each other, either in jousting, weaponry, or horsemanship. One segment of the evening was showing off the eagle which Gavin had personally trained.
All of the attention he received, especially from the pretty ladies, gave him an over-sized ego. But he didn’t mind. At least he knew he excelled at something since he wasn’t doing very well in college. Sadly enough, he doubted he’d ever become the lawyer he’d set out to be when he entered college five years ago.
The music changed to a marching beat. That was his cue to ride into the arena. He urged his horse into a trot and entered the dirt-filled stadium. The crowd in the stands cheered, and he breathed in the great attention.
The Blue Knight rode atop his horse, slowly coming toward Gavin. He couldn’t see the other knight’s face, but immediately Gavin suspected something was vastly different. The armor didn’t fit Lance as it had before. Even the way the knight rode his horse was odd. Either that, or Lance had finally figured out how to ride without bouncing all over the animal.
Both Gavin and Lance maneuvered their steeds in fancy steps as they circled each other. After a few minutes of doing this, they dismounted and withdrew their swords. Cheers in the crowd increased. Some guests even chanted his name.
The clang of the swords meeting each other echoed through the arena. Gavin shifted in the fancy footwork he’d been taught, and the Blue Knight followed his lead. Another thing different about Lance was that his blows were stronger this time. The men who played the knights were just acting and so they didn’t need to overpower the other unless it was planned in the script. However, tonight Lance was stronger. Faster. More determined.
This knight couldn’t be Lance. The man behind the armor seemed shorter and thinner, especially by the way the armor practically hung on the man’s frame. Had they replaced Lance with someone new at the last minute?
More sweat ran down his face as the heat grew inside his helmet. He diligently used his sword to block his opponent, but after exchanging blows for ten whole minutes, his muscles began to ache. Irritation swept over him, so he pushed his opponent harder. Gavin couldn’t lose. He worked out every day for an hour, sometimes more, so why were his muscles screaming for rest now?
Grumbling, he yanked off his helmet and tossed it to the ground in order to get more air to his face. The volume of the crowd lifted. His opponent didn’t remove his helmet. Instead, the Blue Knight paused in his fighting and stared at him.
Gavin arched an eyebrow. What was wrong with the man? Perhaps this was the moment Gavin needed to take control. He raised his sword to finish the game, but in a quick instant, the other man ducked and swept his sword lower, knocking Gavin to the ground.
He swore under his breath. That wasn’t the way this program had been planned.
Gavin jumped to his feet – even with the cumbersome armor limiting his movements – and raised his sword again, but his opponent counter-attacked. Unfortunately, this new person was skilled, almost as good as Gavin.
Anger guided Gavin’s movements. He didn’t care that his muscles were weakening, he continued to meet his opponent’s sword. Completely focused, all he heard was his own heavy breaths and the loud clang of the swords when they blocked the other.
In one quick swipe, his challenger knocked Gavin to the ground again. Out of breath, he lay still and looked up at the roof of the arena. What is going on? The Blue Knight was not supposed to win.
He shifted his gaze toward his rival just as the man started to remove his helmet. Once the object was off, long, auburn hair fanned out around the person’s shoulders, and showed everyone a very delicate and pretty face. A woman?