I'd like to welcome my friend, Jenna Jaxon, to my blog. She has a new release and I can't wait to read it! Today she'll be sharing her historical knowledge with us. I LOVE these types of blogs!!

Traditions of the Christmas Court

As many may have guessed, Christmas in medieval times was quite different from our modern Christmas in how it was kept. The English certainly kept Christmas with lots of revelry and no place had grander revels than the King’s court. Wherever the king decided to hold his Christmas celebration, the nobles of all ranks followed—if they were invited, of course. And to not be invited was a grave injury to one’s status in society.

There are many traditions that would seem familiar to our 21st century eyes: decorating with holly garland, giving presents, singing songs (Christmas carols but not called that until the 15th century), feasting, and dancing. These Yuletide merriments we continue to this day, however, the medieval court had additional pastimes at the Christmas Court that we may not have heard of.

One peculiar (to our eyes) tradition was that of the “boy bishop.” A boy would be elected bishop and would rule over church processions and preach a sermon on December 28, the Feast of the Holy Innocents. A surviving sermon from the period shows the boy bishop hoped that all his schoolteachers would end up at Tyburn (the local place of execution).

Also the Christmas season lasted longer, from the first day of Advent until Twelfth Night (January 6th). The problem was that Advent was a time of fasting. The feasting didn’t begin until Christmas Eve and continued—quite sumptuously—for another two weeks.

And sporting activities were all the rage during a Medieval Christmas celebration. Some years the king would host a joust and most years there would be hunting, especially of the boars that would then grace the tables. These animals were wicked little warriors, and worthy opponents. They were hunted with boar hounds, bred specially for the purpose, and they hunted in pairs. The hunters would ride and chase the boar, then the dog would “catch” the boar in its jaws and hold it while the hunter would kill the pig with a dagger. It would later be served, roasted whole, often with apples in its mouth. Quite the showpiece of the meal.

Because I wanted to give the reader the experience of these medieval Christmas traditions, I’ve managed to weave almost all of them into my novella, Seduction at the Christmas Court. I certainly hope the descriptions bring you a little closer to a medieval Christmas celebration at court. 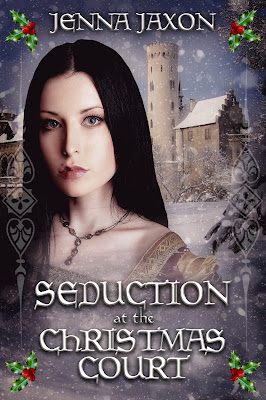 Alyse and Geoffrey, Lord and Lady Longford, have journeyed to the glittering Christmas Court of King Edward III in the year 1349 to wait upon the king and take part in some Yuletide merriment. However, when Geoffrey is suddenly called into the king’s service again, Alyse must remain at court, attending the queen and persuading her rebellious sister to accept an unwanted betrothal. When rumors of Geoffrey’s death arise, Alyse fends off an old suitor who wants to renew their friendship. But how long will he take “No” for an answer?
“This entertainment will be tedious. I would much rather retire for a good night’s bedding right now,” he whispered, the puff of his breath tickling her ear and sending prickles of excitement down her neck.

She laced their fingers together. “’Twill be finished ‘ere long, my love. Then you can wield your weapon with a vigor yon knights cannot.”

He laughed and drank deeply. “Aye, sweet Alyse. My skill with both weapons outshines any other knight.”

“As you will not want me to be judge of that, I think, I will demur to your claim, although I will test your skills again with the one blade ‘ere the night is done.”

At Geoffrey’s bark of laughter—so loud it turned heads on the dais their way—Alyse settled back to watch the mummers, her cheeks burning, but a pleasant anticipation building within as well.

The mummer playing St. George took the center spot in the Great Hall and began a sing-song rhyme that soon had the court laughing at its nonsense. A stream of knights—played in turn by the other mummers—approached, made their rhyming challenge, and were quickly slain by St. George, whose wielding of his sword became swifter and swifter. He slayed the knights in such short order that by the time he faced the final knight, he did no more than look at the Turkish knight than the man fell down, his toes jingling softly as he landed on the soft rushes covering the floor.

A burst of laughter and applause followed that performance as the quack Doctor shuffled forward, his “magic potion” in a large bottle, gripped in his hand.

Thoroughly engrossed, Alyse laughed and clapped her hands. She held her breath and leaned forward as the Doctor poured the potion down the throats of the slain knights, spoke his own rhyme over them, and one by one, they began to twitch and dance, the rush-strewn floor seeming to come alive as they did. The room resounded with merriment as all seven knights revived.

Loud applause burst out from the courtiers, many of whom threw gold and silver coins onto the floor. Geoffrey tossed a gold florin to the Turkish knight. “For my lady’s pleasure,” he called.

The man nimbly caught the coin and made a deep bow. “Thank you, my lord.”

With a lecherous grin, Geoffrey grasped Alyse’s arm and urged her to rise. “And now allow me to attend to my lady’s pleasure as well.”

AUTHOR BIO:
Jenna Jaxon is a multi-published author of historical romance in all time periods because passion is timeless.  She has been reading and writing historical romance since she was a teenager.  A romantic herself, she has always loved a dark side to the genre, a twist, suspense, a surprise.  She tries to incorporate all of these elements into her own stories. She’s a theatre director when she’s not writing and lives in Virginia with her family, including two very vocal cats, Marmalade and Sugar.
Jenna is a PAN member of Romance Writers of America as well as Vice-President of Chesapeake Romance Writers, her local chapter of RWA. She has three series available: The House of Pleasure, set in Georgian England, Handful of Hearts, set in Regency England, and Time Enough to Love, set in medieval England and France.
She currently writes to support her chocolate habit.