I'm excited to tell you about one of my January releases. "The Billionaire's Setup" is the second book I'm co-authoring with my sister, Stacey Haynes. This clean romance has a lot of humor, paranormal (ghosts) with a few spooky scenes, and a GREAT whodunnit mystery.  My editor told me this has been her favorite story so far.

If you've read "The Magic of a Billionaire", then you'll recognize my hero in this story.


He’s looking for an honest woman and true love. The beautiful woman he meets has secrets. Can he trust her with his heart?She dreams of her ancestor’s past life who had been murdered. She can’t let anyone think she’s crazy or she’ll lose her reputation as a billionaire businesswomanIt’s up to the ghost to set them up and make things right. 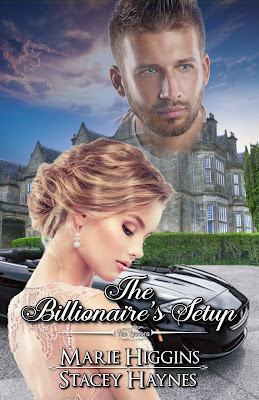 In silence, they continued walking and looking at the headstones in the cemetery. Nicole lifted the list of names up to the light. She narrowed her gaze and her eyes shifted back and forth over the paper. Suddenly, she gasped and straightened. Even in the shadows he could tell color was seeping from her face.
“What is it?” he asked.
“Look,” she said as she pointed to the name on the list. “It says Victoria Carrigan.”
“Carrigan? Is she a relative?” Nolan inquired.
“I don’t know. I didn’t think we had family here. It says she died in 1925.”
“Let’s look for her,” Nolan suggested. “If we happen to find others, then we can check them off, but let’s focus on Victoria.”
Nicole nodded. She moved next to him and hooked her arm around his. Nolan’s heart softened. They weren’t holding hands, but this was the next best thing. It made him feel heroic thinking that he would protect her from anything scary.
Using the flashlight, Nolan scanned each headstone as they quickened their pace to cover more of the area. As they rounded a turn, Nicole tripped on a corner of a broken headstone. She stumbled, and he quickly caught her before she landed on the ground.
“Oh, good grief,” Nicole muttered and stood upright before placing her hand on his chest. “Thanks for stoppin’ my fall. I’m sorry I’m such a klutz.”
“Don’t be sorry.” He grinned. “It’s nice to find a girl who falls for me.”
She laughed and teasingly slapped his arm. “Oh, you are a funny one, aren’t you?”
“Well, you laughed, so I must have been funny.” He gently squeezed the hand still on his chest. “Are you going to be okay?”
“Maybe I just need to walk slower.” She started to move away, but he kept their hands together until their fingers just gradually entwined together.
“We can walk slower,” he said, trying not to let the excitement rushing through his body come out of his voice. “As long as you hold onto me, I won’t let you fall.”
They were not directly in the half-moon’s light, but he noticed a blush filling her cheeks. Elation filled him, and he hoped she was feeling the same giddiness bouncing around inside of her as he was experiencing.

There was something about this man that just made her want to smile constantly and her heart race. She enjoyed the way he watched her with such emotion in his glorious green eyes, but it was more than that. She liked the way he talked, the way he smiled, and the way he teased. She loved hearing the sound of his laugh when they laughed at the same thing.
As she held his hand, she felt like the luckiest woman in the world. It also amazed her that for once in her life she wasn’t trying to act like the billionaire her uncle wanted her to act like. She wanted to be a normal person, and right now, this normal person wanted to walk through the cemetery and hold this gorgeous man’s hand as if they were the only two people here.
Warmth filled Nicole’s face. She was relieved that night’s shadows kept him from seeing her face completely or else he would know she’d been blushing ever since their hands clasped. The rhythm of her heart increased, and she wanted to cuddle against him. Thankfully, that wouldn’t be possible right now.
Nolan was a tall man with strong arms, and just holding his hand made her feel so protected. She raised her gaze to his face. When he looked at her, she smiled. She wanted to hold onto him as he’d suggested, and never let go.
“Are you ready to find Victoria now?”
“Yes.” She squeezed his hand a little more.
She found it strange that he hid his secret just as she was doing. He didn’t want people to know he was extremely wealthy, and it made her feel closer to him since they shared the same secret – even if he didn’t know that about her. But she was more convinced now that he was Aaron Powers… or the cousin, Thomas Powers. It really didn’t matter that he was as rich as she was – what made the difference in how she looked at him was that he was such a sweet man who thought of her feelings. It was so nice to be with a man who didn’t think the world revolved around him.
They wandered deeper into the cemetery, looking at the headstones as they tried to find their list of names, along with Victoria’s of course. It unnerved Nicole to think that she might be related to Victoria in some way, and yet Nicole was excited to get to know her ancestor.
He stepped over a fallen headstone and quickly came to halt. He glanced at the empty space beside him and frowned.
“Oh, I’m sorry Mr. Wright. I didn’t see you floating there. Please forgive me for stepping on your ghostly foot.”
A chuckle escaped Nicole’s throat. Although he was being silly about it, she wondered if he really had seen a ghost, because she didn’t see anything. “Nolan, you might want to ask him to let you know if I get in his way.” Her grin stretched. “I wouldn’t want to cause him any more harm.”
He turned to peer into the shadows again. “Did you hear my friend?” He paused a few seconds and nodded. “Yes, I’ll tell her. Thank you again, Mr. Wright.”
Nolan’s attention swung to Nicole. His mischief smile let her know that he was joking. She was relieved.
“Mr. Wright wants me to tell you,” he stepped around in front of Nicole, taking both of her hands in his, “that he thanks you for your kindness. He also thinks you are a very beautiful woman, which of course, I agree with him.”
Laughing aloud, she stepped closer to him. His arms wrapped around her waist, holding her loosely. The closeness raised her blood pressure a notch or two.
Within seconds, their laughing subsided as she gazed into his eyes… the best she could, anyway. The urge to kiss him was strong. Dare she be the one to initiate the first move?
He licked his lips and her heart strummed faster. Perhaps she should wait and let him make the first move. He started to lower his face toward hers and she closed her eyes, waiting for the moment their lips would touch.
Suddenly, someone from behind pushed her, and she fell against him. Gasping, she swung around to see who had shoved her, but no one was there.
“What’s wrong?” Nolan asked in a voice deeper than she’d been hearing today.
“I thought… I mean it felt like… someone pushed me.”
He glanced around them. “No, sweetie. We are the only two right here.”
She laughed uncomfortably. Irritation grew in her chest. Someone had pushed her, but that’s not what upset her the most. How dare someone ruin their special moment!

Posted by Marie Higgins at 11:25 AM No comments: