New Release - Secrets of the Past (Clean Historical Western Romance)

I'm very excited about my new release. A couple of months ago, Amelia Adams approached me and asked if I wanted to write a story for her bestselling historical western romance series, "Kansas Crossroads". I was THRILLED that she asked me since anyone who reads clean historical romance knows how popular Amelia Adams' stories are. Well, now my story is out!! THANK YOU, AMELIA! 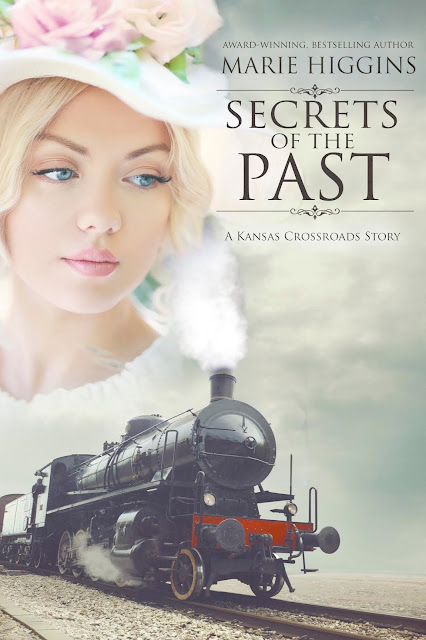 Texas Ranger, Wyatt Donovan comes to Topeka, Kansas, to face his past heartaches. When he meets his childhood friend’s sister after thirteen years, he’s more than ready to become the hero she sees in him.

Josette Allen was always an odd girl, but as a woman, her inquisitive mind makes the town believe she’s insane. When her childhood crush saunters into town, stirring up old feelings, Josie is ready to catch his eye. Unfortunately, the only thing she’s good at catching is mayhem.

Will she ever be the reason he has stars in his eyes… or will she always be the thorn in his side?

Bone-weary after yet another hard day’s ride, Sergeant Wyatt Donovan collapsed onto his bedroll before the crackling orange flames. The warm glow did little to ease the chill from his bones.
“How are those beans coming along, James?” Wyatt’s best friend stooped over the fire as he stirred a spoon in the pot, grinning like a cat with cream. James had acquired a small stash of beans – a rare commodity in the south these days. “Just where did you find the beans?”
James lifted the pot from the grate over the flames and poured the steaming cooked beans into two separate mugs. “You really don’t want to know.”
Wyatt gave James a nod. No doubt he’d traded with some Yankee.
Wyatt took his first bite of beans in over a year and sighed. Pure bliss. At the moment he didn’t particularly care if the devil himself provided the gift. He relaxed against the bedroll propped next to the saddle, resting his head, and let the hot food warm him from the inside out. He took another bite and reached into his saddlebag, withdrawing the battered letter he’d received that morning. Mail was just as scarce as beans and he wanted to savor the irony of having both at once.
“Is the letter from that pretty little wife of yours?” James plunked down beside him with a suggestive wink.
Wyatt turned the letter over in his hand. “It’s from your father actually. I haven’t found a moment to read it, until now.”
“My father?” Deftly James snatched the letter from his hand. “Why is he writing you?”
“I don’t know. Give it back and we’ll find out.” Wyatt yanked the envelope back.
James’ question was on Wyatt’s mind, too. Why would Dr. Allen write to him? Quickly Wyatt slipped a thumb beneath the folds and opened the missive. “It’s dated August 18th.” He shook his head, tossing a sidelong glance to James. “What is today’s date?”
“I don’t know.” James shrugged. “Christmas was… what? Three days ago? So, it’s the twenty-eighth.”
“Your father sent the letter over four months ago,” he scoffed.
“Who cares? Even old news is still news. Would you just read it to ease both of our minds?”
“All right, all right.” Wyatt shifted his gaze down the page. “Dear Wyatt.” He paused for dramatic effect, purely to torment his friend, and grinned.
James slugged him in the arm. “Read it!”
Wyatt grinned. His friend’s curiosity was as great as his was. “It is with a heavy heart and deepest regrets that I write to inform you—” Wyatt stopped short, eyes riveted to the doctor’s impossible scrawl as he continued to read in silence – of the unfortunate and untimely death of your wife. She’d traveled from Missouri to visit us for a spell, but just yesterday Marjorie was found in the woods, dead. Unfortunately, nothing could be done, and I determined the cause of death was murder. I believe she was poisoned, but I cannot prove it. I realize you are a man who likes answers, but I fear I’m unable to offer any at this time. To my best estimation, Marjorie died very early in the morning after someone had taken her to the wooded area and poisoned her. Rest assured, we have contacted her family and they will plan the gravesite service for your wife here in Tokepa, Kansas. Yours in friendship, Dr. John Allen
Numb, Wyatt flicked his gaze back over the words. No! It couldn’t be true. He read the missive a third time. His stomach clenched, and the page trembled in his grasp.
Come back to me, Wyatt… Marjorie’s lilting voice rang through his mind as clearly as if she were standing beside him. He could more than hear her, he could smell the exact scent of lilac in her hair and see the amber of her eyes.
Numbness gave way to denial.
She wasn’t dead. She couldn’t be. Not for four months. If Marjorie was truly gone, he would feel it. She was a part of his soul. If she died, a piece of him went with her. But he was still whole… wasn’t he?
“No, God. Please, no!” Denial dissolved into anguish. He was the one fighting a war. He was supposed to die. Not Marjorie. Never Marjorie.
“Wyatt?” James rested a hand on his shoulder. “What happened? What’s wrong?”
Fiery red-hot anger burned within him, twisting and contorting until the sliver of his soul belonging to Marjorie and no other broke off and slipped away, leaving nothing but pain in its wake. The collar of his butternut jacket tightened, and he couldn’t breathe.
Shaking with rage, Wyatt stood, wadding the miserable missive. The hot beans spilled down the front of his trousers. He didn’t care.
James wrenched the crumpled paper from his fingers, smoothed out the wrinkles and skimmed the paper. His face turned pale and tears gathered in his eyes.
“Wyatt, I… I’m so sorry,” he murmured after a few moments in a shaky voice. “I don’t know what to say.” Gently he refolded the letter, handing it back to Wyatt.
“Burn it.” Wyatt met his friend’s tearful gaze. “I never want to see those words again.”
With a nod, James threw the crumpled note into the fire. Instantly the flames licked the edges of the paper, obliterating all evidence. Unfortunately, the truth was not so easily banished and as the last ashes disappeared, so did every hope and dream he’d nurtured for his marriage.
Wyatt vowed never to fall in love again. The pain of losing someone was too unbearable.