Jenna has been a internet friend for several years. I feel like we know each other so well, and yet we haven't met face-to-face. Maybe one day!

Jenna has a new release and I can't wait to share it!

A Scandalous Dance—The Waltz During the Regency Period 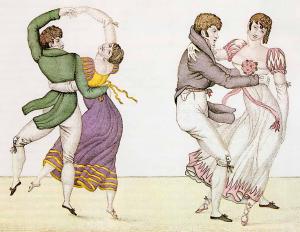 Most people know a waltz when they see one—a romantic ¾ time lilting dance for partners where they hold each other at the hand and waist as they twirl around the dance floor. Not quite so during the Regency period.

The Regency waltz, as it was danced in the early 19th century, was very different from the form we know today, but still had the reputation of being scandalous. In fact, young ladies who were just out in society in their first Season had to get permission from a Patroness at Almack before she could dance the waltz at the Assembly rooms.

So what made this particular dance so shocking?

Walter Nelson in an article titled “The Shocking Waltz” describes the movements of the Regency waltz as “a strikingly intimate and sensuous dance, which is a major departure from the group dances and stately minuets of earlier generations. To a society that focused so much attention on harnessing teen age libido to the purpose of making a good marriage, this was rather disturbing.”

The article goes on to comment that although English Country Dancing, considered imminently respectable, contained both direct eye contact and body contact but in very limited amounts. In the waltz, however, “the eye contact is continuous and unflinching and so is the body contact -- with hands, ... resting on any number of body areas, and lingering there for a while.”

You can understand how the matchmaking mamas watching all this very physical contact might get very nervous about the attention their darling daughter was paying to one particular gentleman—who might not be a very nice gentleman in the end. As the hero of Heart of Desire says, the waltz should be danced only by married couples. Of course, he’s dancing it with a woman who is not his wife when he says it, which draws her caustic comment to be sure!

Here is a youtube clip of how the waltz was danced - https://www.youtube.com/watch?v=9nwwYlm-G1s 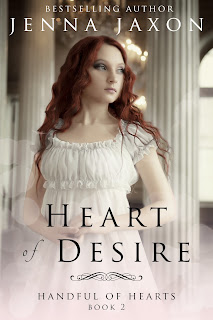 Miss Katherine Locke is irked to start her third season dancing with the disagreeable Lord Haversham, her brother’s friend and her own arch enemy. After three years out, however, she’s finally interested in the dashing Lord Finley—only to find out her cousin has set her cap for him too. To make the man jealous, Kate feigns interest in Lord Haversham, only to be shocked to find the handsome lord apparently falling for her. With time running out, should she accept his suit and risk falling in love despite herself?

Marcus, Lord Haversham, is in a tight pinch. His estates are failing and worse, he’s just lost three thousand pounds to his best friend, Lord Ainsley. Ainsley’s solution: have Marcus marry his shrewish sister and he’ll cancel his gambling debt plus give him ten thousand more pounds for her dowry. With nowhere to turn, Marcus agrees, praying he can keep word of the wager from Miss Locke long enough to charm her into marrying him. But can he avoid falling in love himself?

The music had a lively air and Miss Katherine Locke would’ve thought herself fortunate to be out again in Society after a long, cold, dull winter in Somerset save that her partner, Lord Haversham, was the rudest man in London. Well, his lordship was about to discover that Kate Locke was not one to suffer fools lightly.

“So you refuse to allow your sister to waltz, yet you are quite willing to stand up with me and dance this, according to you, most scandalous of dances.” Kate smiled into the odious wretch’s face. “My lord, I should say that smacks of hypocrisy.”

“Indeed.” Lord Haversham turned them skillfully at the end of the floor. “I would say it showed a want of character in your brother for allowing you to dance it with me. The waltz should be danced by married couples and no one else.” He pulled her close against him, so their bodies almost touched.
She gasped at her proximity to the rogue. How dare he make a spectacle of them on this crowded dance floor?

“You see?” he whispered, peering into her face, his gaze intent upon her mouth.

All she could see were his cool gray eyes, as the crisp scent of his sandalwood cologne filled her nose.

“Ainsley should be horsewhipped for allowing it.”

“I’ll see to it he horsewhips you if you don’t let me go.” Kate gave a hopping step and smashed her foot down on top of his.

For the briefest moment, they stood pressed together in a warm embrace that made Kate tingle all over. Then outrage swept through her, and she pushed him away. “How dare you,” she seethed, trying to pull away from him.

“That was your fault, and you know it. And if you make a scene that results in me having to marry you, I swear I will lock you in the tower at my grandfather’s castle and throw away the key.” Lord Haversham righted himself and smiled at her with clenched teeth.

Jenna Jaxon is a best-selling, multi-published author of historical romance in periods ranging from medieval to Victorian.  She has been reading and writing historical romance since she was a teenager.  A romantic herself, she has always loved a dark side to the genre, a twist, suspense, a surprise.  She tries to incorporate all of these elements into her own stories. She lives in Virginia with her family and two rambunctious cats, Marmalade and Suger.  When not reading or writing, she indulges her passion for the theatre, working with local theatres as a director.  She often feels she is directing her characters on their own private stage.

She has equated her writing to an addiction to chocolate because once she starts she just can’t stop.

I have an actual website, and I’m excited to tell you all about it and share it with my friends. This website is easy to maneuver, and the pictures are very eye-catching. (I had to keep up with my awesome book covers, right?) I have a few new features. Along with the books section, I have one for my blog—which links to my old one—and I have a contact page, a contest page, and a book signing page that will let you know where I’ll be signing next. Be sure to check them out!

One of the new features I like is my newsletter sign up section (located on the home page and ‘about me’ page). So to give my website launch the kick-off it deserves, I’m offering a FREE book if you sign up for my newsletter. The book I’m giving away free is: 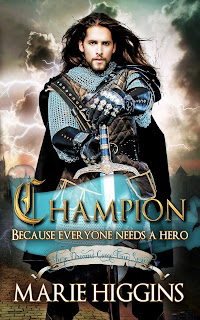 When you wish upon a star…

All romance novel photographer Payton Fox really wants is a hero in her life. A man that is dashing and honorable… a man worthy of his own fairy tale! One particularly frustrating evening she casts a fleeting wish upon a shooting star. She doesn’t actually believe anything will happen, but in the blink of an eye the man from her fairy tale wishes—a regular Robin Hood—materializes right before her. He even claims to be the legendary Lord of Loxley, and goes by the name of Archer. Uncertain what to believe, Payton is shocked when this hero rescues her time and again, and she can’t help but be swept off her feet.

Slowly she accepts that this strange and noble man might truly be the fairy tale character of her dreams. Unfortunately, Archer isn’t connecting with the modern-day world and longs to return to his time. She also discovers that if he stays with her, his story will cease to exist.

Can she send him back, knowing he’ll take her heart along with him? Can she deprive the world of his story? How can she do that to those looking for their Champion - the perfect hero?

Now, without any further distractions, I invite you to wander through my new website – www.mariehiggins.com.  Or just click on the "HOME" tab at the top of this page.

Posted by Marie Higgins at 9:13 AM No comments: