I'm excited to tell you about book #2 in my new series, "The Gifted". Katrina's sight is a Regency Romance Suspense with a touch of paranormal. 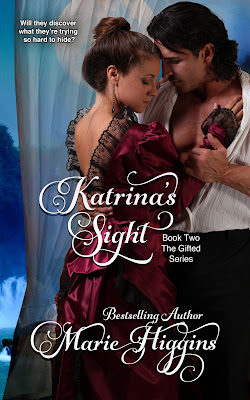 The gift she never wanted…
Since Katrina Landon was a young girl, she has always had the gift of forewarnings. Usually this sight has never disrupted her life. Until now. The wealthy father she has never known wants to meet her, but she has to travel from the slums of London through the Amazon rainforest to his plantation in order to get an inheritance. But her premonitions are warning her of the dangers ahead. If only her gift could tell her more about the handsome guide, Mr. Knightly, who immediately stirs her temper…and her interest.
Felix Knightly isn’t looking forward to escorting a spoiled rich girl through the jungle no matter how much her father pays. Yet when he meets her, he finds Katrina’s distracting innocence and charming demeanor unsettling. He’s not certain what to think about the sudden forewarnings she keeps giving. He’d rather fight off the fire ants, howler monkeys, and crocodiles than risk losing his heart to her, since he’s never met a wealthy woman who is honest.
As they delve deeper into the shadows of the rainforest, they discover they weren’t just wrong about each other, they were wrong about the dangers of the jungle. Someone wants them dead and they have to find out who and why before it’s too late.

The farther into the jungle they sailed, the thicker the knotted trees became until she couldn’t see anything in between each one. The sun glinted off the murky water, making shadowy figures of the trees and bushes. It was so peaceful and still, except for the men on the boat wandering around as they kept the vessel moving and the occasional shouts from Mr. Knightly.

It still upset her that he hadn’t allowed her mother to come along. But in truth, having her mother take this journey would not have been wise. Thankfully, Mr. Knightly kept to his word and there was another woman on board. She was a good ten years Katrina’s senior, and hadn’t yet said one word to her. Katrina hoped they would at least carry on one decent conversation during the trip…as long as the woman spoke English.

A movement in the water caught her eyes, and she studied the shape as the barge crawled closer. She leaned over the railing a bit more, trying to see what skimmed just under the surface. Some kind of animal, to be sure.

The creature was long and pointy at both ends. Beady eyes watched her, barely above the water. At first she thought it to be an alligator, but the river wasn’t transparent enough for her to see clearly, and she didn’t think an alligator could be that large.

She leaned a little closer to get a better look. As the boat passed, the animal’s eyes narrowed. Then, within a split second, it lifted it’s head and snapped its long jaws, jagged with sharp teeth, toward her. Crying out in alarm, she withdrew. Suddenly, from behind, two hands grabbed tightly to her waist, and she jumped.

“You fool!” Mr. Knightly scolded, practically yelling in her ear. “Do you want to fall in the river and become that crocodile’s lunch?”

With shaky hands, she placed them over his to remove his hold. Instead, she found comfort in those long fingers spanning her waist. Her heart hammered more from his nearness than from the hungry crocodile. She fought the urge to lean back and rest against his chest.

In a flash, one of her sights came. It was dark, but she could see Mr. Knightly’s handsome face clearly. He wore a serious expression as he moved closer to her, lowering his head as if to kiss her…

She quickly shook the forewarning away. Now that she knew the man would try to steal a kiss, she would do her best to fight it.

“Forgive me for causing you distress just now,” she said. More than anything, she didn’t want him to think she had no common sense. For once in her life, she wanted a man to take notice of her intellect and not her appearance. “I…um, I assure you I was in control and wasn’t going to fall.”

She met his gaze over her shoulder. He stood so close his rugged jaw nearly touched her forehead. She could lean in and rub her forehead across his day’s stubble if she let herself.

Slowly, she moved her focus to his lips. At first they were straight and hard, but the longer she stared, they softened and soon parted. When she met his eyes again, their color wasn’t dark with anger as it had been before. Instead, he wore a simple expression of kindness and concern.

Kindness? No, she must be mistaken.

Yet she knew he was kind because he’d shown her by allowing her to charge her clothing purchase on his account while they were at Consuelo’s earlier this morning.

He wouldn’t try to kiss her now, would he? She pushed the silly thought away. Of course not.

Mr. Knightly pulled away, taking two steps back. Once again, anger lines appeared on his handsome face. “Just make certain you don’t get too close and fall overboard. I can promise the crocodiles will get to you quicker than I will.”

Posted by Marie Higgins at 10:34 AM No comments: