I'm very happy to announce that my very first YA Fantasy story has been released!!

I'm also very nervous. This is the first time I went out on a limb and wrote this kind of book. Thanks to my niece, Dusti Miller, she helped me turn this story into one that readers of all ages will love. (grins) 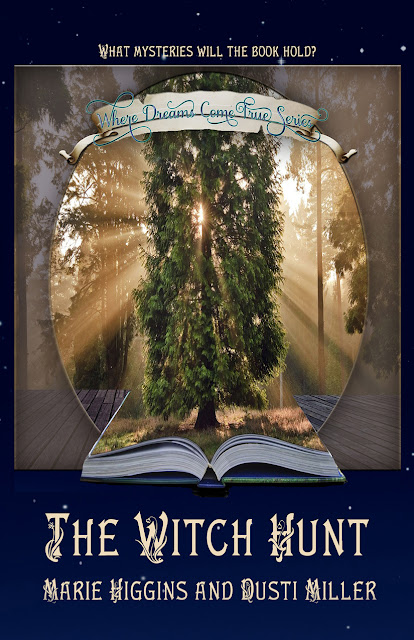 I thought I'd tease you with the prologue. ENJOY!

Jasper King dashed across the field, ducked under the wooden gate, and ran as fast as his fourteen-year-old legs would carry him. Fear of the unknown spread through him like wildfire. With each step, his buckled shoes slipped on the damp grass and he struggled to stay upright. Afraid he might drop the black, leather-bound book, he clutched it tighter and hurried toward the house as though the devil himself was on his heels.
As he came closer to the two-story A-framed house, tears stung his eyes. Ma’s laundry hung on the clothesline, and the aroma of baked bread and freshly churned butter filled the air. When he reached home, he would feel safe and secure. He hoped. But then he must find a way to get his brother back and destroy the book—Satan’s own tool—once and for all.
Jasper’s mind reeled with fear. How had he allowed this to happen? As he sped past the well, his toe caught a stone. He stumbled and flailed to the ground. The book flew from his hands and bounced open in front of him. Sharp rocks bit into his knees and palms and he cried out. The pages, like wicked eyes, pierced his soul. Panic grew inside him, overshadowing the pain of his wounds.
Jasper scooted away from the book. He dared not touch it for fear its vileness would sink into his skin like venom from a snakebite.
“Let me be,” he shouted at the book. “You will not take me!”
Above him, thick, dark clouds gathered in the sky, and the air turned chilly. The wind whipped violently around him, tearing at his clothes and hair. Jasper’s heart sank in despair. He knew what was coming. He swallowed hard and clenched his fists. Not matter what, he couldn’t allow the book to weave its magic spell around him as it had David.
Only a short time ago, he’d watched helplessly as the book had taken his brother. Taken him! David’s screams still echoed in Jasper’s head. He covered his ears, closed his eyes, and prayed the memory would quickly disappear.
There was only one logical explanation. Jasper’s grandmother had been hung for witchcraft, and although the family believed she’d been judged wrongly, Jasper now had a different opinion. Obviously, the book held some kind of power. Had his grandmother truly practiced witchcraft and cast a spell on its pages?
A high pitched whistle emanated from the book. In the distance David’s voice called out to him.
“David? Where are you?” Jasper cried.
“Please…help…me…” Each word of David’s plea grew softer until it silenced completely.
Tears spilled down Jasper’s face. He wiped the back of his cuffed sleeve across his cheeks as helplessness expanded in his chest. What would he tell his ma and pa? He was certain they would never believe what happened. Even now, Jasper wondered if he was dreaming. But he’d watched how the pictures on the pages shifted and grew…
He shivered. Nay, this was not a dream. Something evil had settled inside the book and was after him, even after snatching his brother.
A white mist swirled from the pages, rising up like smoke from a chimney. Within seconds, the mist had transformed into hands…their beastly claws reaching toward him.
Jasper cried out. He scrambled to stand, but slipped and slammed to his knees once again. Perhaps he would meet his brother’s fate after all. Who would tell his family what happened to them? Who would destroy the vile book so it never devoured another soul?
Warm tears slid down his cheeks. He blinked them back and looked toward the house. He saw his ma running through the tall grass toward him. She called out, but the bitter wind kept her words from reaching his ears.
The white mist thickened around him. Jasper’s body froze, as did his mind.


Perhaps this was a dream after all…

Posted by Marie Higgins at 9:10 PM No comments: