My third book in The Lovelorn series will be here in a few weeks, so to entice you to add this book to your pre-order list, I'm giving away Chapter One for FREE! 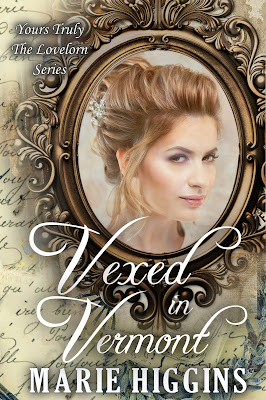 Nicolette McFarland will do anything to prove her worth as a Veterinarian, but when a man from her past comes back to interrupt her life, she doesn’t know what to do. Desperate, she sends a letter to a newspaper article for advice. While waiting for The Lovelorn to respond, Nicolette tries her best to show everyone around her how good she really is. Unfortunately, the vexing man from her past, Captain Adrian Robinson, ends up getting shot, and it’s up to her to help him even if she doesn’t want to. All she knows is that The Lovelorn had better hurry and reply to her letter because Nicolette is in grave danger of losing her heart – or having it broken forever.

Dear Lovelorn,
I have just received some unsettling news, and I’m not sure how to handle it. I’ve lived with my aunt since I was nine years old, and although my aunt and her husband have treated me well and raised me to be a lady, those first few years with her family were not pleasant. My aunt’s stepson was a thorn in my side since before he joined the military several years ago. Now he’s coming back and he’ll stay at his father’s house until he can start a new life. I have been enjoying life and the rituals of courtship, but I still haven’t found anyone to love, so I must continue to live with my aunt. Please, Lovelorn, tell me how I can handle my aunt’s womanizing stepson who has no morals. I fear he’ll return to his childhood tactics that made my life intolerable, and I might not have the patience to put up with him. What if I strangle him… or shoot him? I’m anxiously awaiting your advice.
Sincerely, Vexed in Vermont