Only Scandal Will Do...

I'm excited to introduce you to my friend, Jenna Jaxon!!  Her latest release - Only Scadal Will Do - looks like a steamy read!!

Jenna is giving away a copy of her book, Betrothal. If you would like to enter her contest, comment and leave your name and email so she can contact you.

Jenna Jaxon is a multi-published author of historical and contemporary romance.  Her historical romance, Only Scandal Will Do, the first in a series of five interconnecting novels, was released in July 2012. Her contemporary works include Hog Wild, Almost Perfect, and 7 Days of Seduction.  She is a PAN member of Romance Writers of America as well as a member of Chesapeake Romance Writers. Her medieval romance, Time Enough to Love, is being published this year as a series of three novellas.  The first book, Betrothal, released on April 19th.

Jenna has been reading and writing historical romance since she was a teenager.  A romantic herself, she has always loved a dark side to the genre, a twist, suspense, a surprise.  She tries to incorporate all of these elements into her own stories. She lives in Virginia with her family and a small menagerie of pets.  When not reading or writing, she indulges her passion for the theatre, working with local theatres as a director.  She often feels she is directing her characters on their own private stage.


She has equated her writing to an addiction to chocolate because once she starts she just can’t stop. 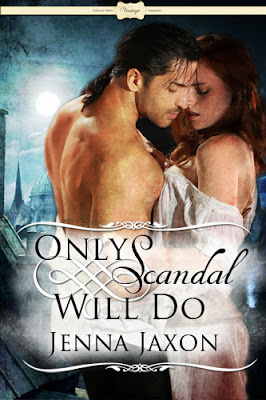 He has the woman of his dreams, but what price will he have to pay to win her heart?

Kidnapped and sold at auction in a London brothel, Lady Katarina Fitzwilliam squelches an undeniable attraction to the masked stranger who purchased her, pits her wits against him, and escapes him and the scandal that would ruin her life.

Unable to resist temptation in a London brothel, Duncan Ferrers, Marquess of Dalbury, purchases a fiery beauty. She claims she's a lady, but how can she be? No lady of his acquaintance in polite society is anything like her. Then he discovers she is who she says, and that this latest romp has compromised her reputation. He knows how that is. One more scandal and he'll be cast out of London society, but he needs a wife who'll provide an heir to carry on his illustrious family's name. He seeks out Katarina, intending only to scotch the scandal, but instead finds his heart ensnared. He's betting their future he'll capture her heart, but does he have what it


takes to win the wager?

WARNING: A blade-wielding heroine who crosses swords with a master of sensuality. 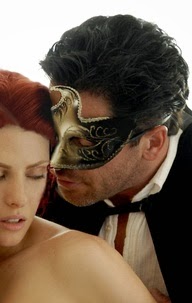 Excerpt for Only Scandal Will Do:


“Lady Katarina,” the marquess said, taking her limp, cold hand. “I have been looking forward to this moment ever since I heard you were in London.”


That voice sent shivers down her spine. She remembered well the arrogance in it when he’d declared himself her master. Soft and silky now, his mouth poised over her hand, and the words sent searing heat that penetrated her long kidskin gloves. Only sheer determination kept her from snatching it out of his grasp, and fear at what might be said if she acted in any way as though she had met this man before. No one must know.


She made herself look at his face, into the dark brown eyes that gleamed with…apprehension? Amusement? Katarina twitched her mouth into what hopefully passed for a smile and said, “I am delighted to make your acquaintance as well, Lord Dalbury. Although I must confess that until just now I had not heard your name.” Although pleased to hear how strong her voice sounded, she feared she might choke on the lies she spouted. Kat slipped her hand from his and a measure of calm returned.


Jack was deep in his conversation with Lord Braeton, completely unconcerned about her. She tried to refrain from looking at the marquess, but he demanded her attention by addressing her again.


“I almost missed the pleasure of making your acquaintance, Lady Katarina. I left the ball just before midnight, but one of my carriage horses came up lame and I returned to ask Braeton for the loan of a replacement. Lady Luck surely smiled on me tonight.” His wide smile seemed genuine, his voice tinged with a hint of relief.


She sighed. Her last night in England and Lady Luck had to favor this fellow.


He continued on, disregarding her silence. “I understand from Lord Braeton that you and your brother only arrived from the colonies three months ago, Lady Katarina.”


She found it hard to keep her tone civil. “Yes, my lord. We came to England in early February.” As she had told him before! It helped not to look at his eyes. Instead she fastened her gaze on his cheek. He would likely carry those scars the rest of his life. She hoped it hurt his vanity every time he looked in the mirror.


He apparently saw where her gaze lay, for he ran his finger down the center mark. “Ah, I see you are curious about my wounds.” He shifted his weight slightly, drawing her a little away from the others.


“Is it a war wound, my lord?” she asked, feeling the return of her confidence.


“It is a badge of honor I wear, given to me by a worthy opponent who I underestimated in many ways. I now regret the chance encounter, Lady Katarina.” He lowered his voice. “She did not deserve the treatment she had at my hands. I make my most sincere apology for doubting her words to me.”


Kat stiffened at this offering. How could he stand there and try to apologize so cavalierly in a crowded ballroom? “Whoever she is, then, Lord Dalbury,” she said sweetly, “I hope your opponent is more forgiving than I would be.”


Don't forget to enter Jenna's contest to win her book!!
Posted by Marie Higgins at 3:00 AM

Labels: Historical Romance, Jenna Jaxon, Only Scandal Will Do

Hey fellow readers! Only Scandal Will Do is awesome. It's got suspense, and adventure and once you start page 1, expect a late night, because you won't stop till your eyelids droop.
Seriously folks, I loved this book.

This is a great book!! Tweeted and shared!!

I'm a tremendous fan of Jenna's ! And this book, I love that it pushes the envelope of traditional romance boundaries. It's intriguing and unique...and sorry, I'm rambling.

First, thank you so much, Marie, for having me on your blog today! I do appreciate it so much.

Elf--Thank you so much for that glowing recommendation!I'm so happy you enjoyed Scandal!

Collette--Can't wait to get your take on Scandal! I do hope you enjoy it too. :)

Christi--You can ramble like that any time you want! LOL I love all my fans--your support is fabulous!

Thank you ladies all for coming by today!

Jenna, I believe Elf. I've read your work before (still hoping an agent or big publisher grabs it), and I must say you are a fantastic writer!! I wish you tons of luck with this story. I know you'll do well!

I loved Scandal! All of Jenna's books are amazing!

What a great excerpt and the cover is lovely! I wish you all the best!

This was a wonderful book.

Only Scandal Will Do is a book no one should miss. I loved it!

Excellent excerpt. Congrats on your release.