It's finally here! This story really should have been written and released in January, but then life got in the way. But, I'm very happy to announce the third book that I've written with my sister is available!

Here is the first chapter for your enjoyment. 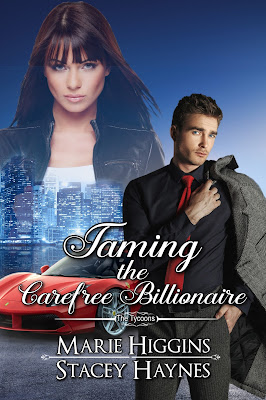 Carefree billionaire, Thomas Powers, is slacking in his duties. He’s living a wild lifestyle and letting the family winery business slip away from his priorities. It’s not until he meets a headstrong photographer when he realizes this is the first woman who doesn’t melt whenever she looks at him. It’s a challenge, but he’s determined to change her mind. He’s also determined to get rid of a problem in his life – the pesky imaginary man who proclaims to be Thomas’ guardian angel.

Morgan Foster is a photographer for a tabloid paper, and when she suspects there’s more to the story on one of her assignments, she’s determined to find out what is really happening. Unfortunately, that means she must work with the arrogant man who enjoys playing with women’s hearts. Being nice to him is difficult, only because she doesn’t want him to eventually capture her heart.

Posted by Marie Higgins at 8:29 PM

Labels: Stacey Haynes, Taming the Carefree Billionaire. The Magic of a Billionaire, The Billionaire's Setup, The Tycoons Series