Excerpt - An Agent for Cecily

I can't wait for December 7th. My next release, a historical romance that's part of the multi-author series "The Pinkerton Matchmaker" - will be released. I've sent the story out to my advanced readers, and already they're letting me know how much they love this story and they 'can't put it down'. I love it when readers tell me that!!

So here's a little teaser from my upcoming story! 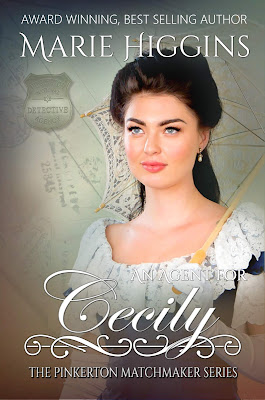 There’s only one way to escape Cecily Sheldon’s insane family – take on someone else’s identity. Along with this new identity comes a new job. Of course, to become a Pinkerton Agent, she must marry a male agent who will train her. Now she needs to keep her true identity hidden from Broderick Tanner for fear he’ll arrest her along with her father and brothers. Perhaps living a double life wasn’t a good choice after all.

Cecily entered the Pinkerton Agency Office, and noticed several other ladies waiting in the lobby. They appeared as nervous as she was. And thankfully, none of them were dressed for a real wedding.


Mr. Gordon’s secretary, Marianne, moved from one woman to the other, whispering something in their ear and giving them a reassuring hug. When the woman reached Cecily, she smiled and squeezed Cecily’s hands.


“You are breathtaking, Miss Livingston,” Marianne said. Her bright eyes twinkled like emeralds.


It surprised Cecily how young Marianne looked. The woman was about the same height as Cecily, and her brownish-red hair made her porcelain skin even lovelier. Marianne’s smile even comforted Cecily.


“There’s no need to worry. Mr. Gordon has teamed you up with one of Pinkerton’s finest agents. He’s a kind man and will treat you well.”


Cecily didn’t know how to reply, only because she wondered if Marianne told this to all the other women. It didn’t ease Cecily’s anxiety, but it didn’t matter. She was determined to make this her new life.


Suddenly, the group of women moved. Another door had been opened and they were ushered into a spacious area. Several handsome men stood against the wall. Most of them wore dour expressions. Cecily suspected they were not thrilled about having to marry, just as the women weren’t.


It surprised Cecily to see the room was decorated nicely with flowers and ribbons. A long table stood on one side with a white tablecloth and a line of cakes on top. She also noticed a tray of meats and cheeses. Marianne must have fixed this up to make the women agents feel more comfortable about their wedding.


Mr. Gordon stood at the head of the room. Once everyone was quiet, he started reading names, pairing the couples together.


Shifting from one fancy boot to the other, Cecily wrung her hands against her middle, waiting for her name to be called.


The beat of her heart quickened. She was thankful that she had instructed Mr. Gordon to use her name instead of Ruth’s. As she took her first steps toward her new husband, something in the back of her memory caused her to pause. She’d heard his name before… somewhere.


On shaky legs, she moved to the front of the room alongside the other couples. Her partner walked toward her, his gaze skimming over her attire. She also looked him over from the top of his sandy brown hair, down his handsome face, broad shoulders and wide chest, admiring the way he looked in his dark gray suit jacket and trousers, black waistcoat over a white shirt, and his necktie.


When he stopped beside her, she realized how tall he was, and she had to tilt her head back to look into his face.


He offered a polite smile. “It’s nice to meet you, Miss Livingston.” He bowed slightly.


She curtsied. “It’s a pleasure to meet you, Mr. Tanner.”


That name! Where had she heard it before? But it was more than just his name. He looked so familiar.


As they stood side-by-side, she peeked at him out of the corner of her eye, assessing his face, slower this time. He didn’t meet her gaze, for which she was relieved. But until she figured out how she knew him, it would drive her mad.


Mr. Tanner’s attention finally landed on Cecily, and he caught her gawking at him. This time, he looked at her differently… as if he recognized her, too.


“Forgive me, Miss Livingston, but have we met before?” he asked.


Inwardly, she groaned. Had she told him her real name four months ago? Although she couldn’t remember their conversation word-for-word, she was sure she hadn’t told him her name, just the names of her mother’s parents.


Cecily had been filthy that morning. Soot had covered her from her head to her feet. Her hair had been ratted and in disarray, and she probably looked like she didn’t own a brush. She’d worn an ill-fitting dress that she had sewn together from dresses which didn’t fit her any longer.


So what part of her had he recognized now?


She forced herself to breathe slower, trying not to appear too rattled by his question. “No, Mr. Tanner. I think I would remember meeting someone so blindly attractive.”


Her mind stuttered to a halt. What did I just say?


She’d heard her father and brothers flirt so many times, the words just slipped out of her mouth. If there was a hole big enough to fit her, she’d climb in it right now.


Mr. Tanner’s eyes widened. His mouth started to pull into a grin, but seconds later, it turned back into a scowl.


Heat rushed to her face and she turned toward Mr. Gordon. That was an awkward moment. Cecily surmised that Mr. Tanner probably thought she was a brazen woman. She was far from it. Then again, she wasn’t a Sheldon any longer. Perhaps living as Ruth Livingston would allow Cecily to act as she’d always wanted but hadn’t dared.


The possibilities were endless… and exciting. She couldn’t wait to experience this whole new life.
Posted by Marie Higgins at 10:37 AM

Labels: An Agent for Cecily, multi-authors, The Pinkerton Matchmaker

Marie, this is a wonderful story and I cannot wait to post my review!!!

Thanks, Lori! I'm excited to read your review, too. :)